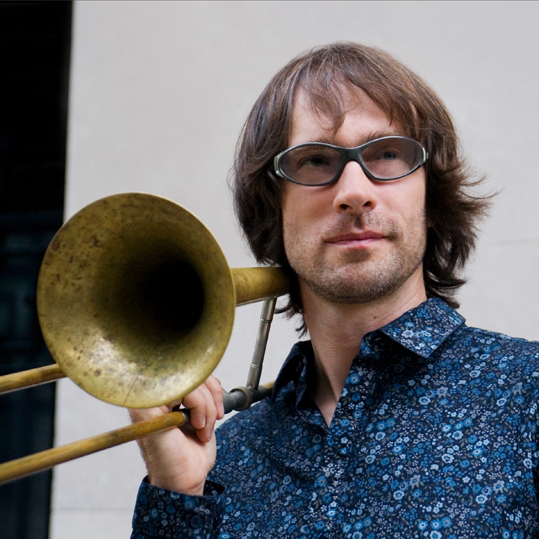 CHRIS WASHBURNE is Associate Professor of Music at Columbia University and the founder and director of Columbia's Louis Armstrong Jazz Performance Program. In 2003, he led a successful campaign to include jazz in the Core Curriculum (Columbia is now the only university that requires all of its undergrads to study jazz before they graduate). Since 2006, along with professors from the Columbia Business School, he has been developing and presenting lectures on improvisation and jazz into MBA, EMBA, and Executive Education programs (the Columbia Business School is the only school to include jazz and improvisation across all of its post baccalaureate programs). Since 2010, he has worked as an innovation and leadership consultant, tailoring jazz and improvisational programs, for the World Economic Forum and a number of private and public companies, and in 2013 he and his jazz group were invited to Davos as the first jazz group to lecture and perform to world leaders as part of the official program at the World Economic Forum. Since 2000, he has participated in Carnegie Hall's Musical Connections program where he developed jazz and improvisational programs and conducted long term residencies, working with inmates at Sing Sing Federal Prison, with court involved youth at the Cross Roads juvenile detention center, with parolees at the Bronx Neon parole center, with AIDS patients at Jacobi Hospital, and with residents at a number of homeless shelters in New York City.

As a trombonist, he has toured extensively throughout Europe, the Americas, Africa, Asia, and the Caribbean. He leads the highly acclaimed Latin jazz group, SYOTOS, and co-leads the jazz quartet FFEAR. He has been called "one of the best trombonists in New York" by The New York Times and was voted as a "Rising Star of the Trombone" in the 2008, 2009, and 2010 Downbeat Critic's Poll. He has recorded over 150 albums and has performed with Tito Puente, Celia Cruz, Eddie Palmieri, Ruben Blades, Celine Dion, Gloria Estefan, Justin Timberlake, Marc Anthony, Björk, They Might Be Giants, the Smithereens, Arturo Sandoval, and John Cale among many others.

Chris Washburne has published numerous articles on jazz, Latin jazz, and salsa. His book, Sounding Salsa: Performing Latin Music in New York was published in 2008 by Temple University Press.His book Latin Jazz: The Other Jazz is published by Oxford University Press (2020). And he is also working on a book to inspire general readers about why jazz matters.

See his talk, Why Jazz Matters