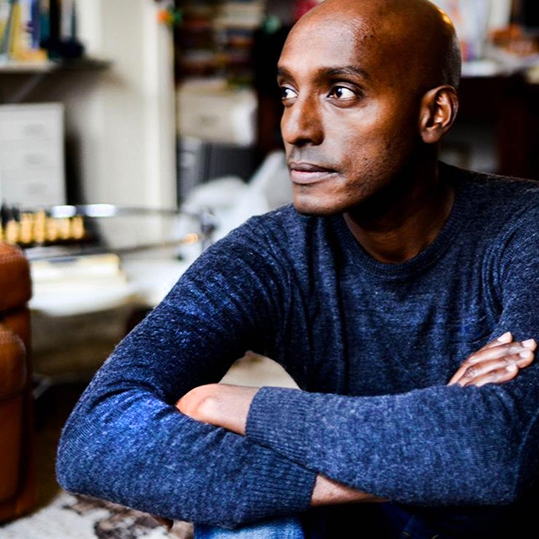 SULAIMAN ADDONIA s a British-Eritrean-Ethiopian novelist who fled Eritrea as a refugee in childhood. He spent his early life in a refugee camp in Sudan following the Om Hajar massacre in 1976, and in his early teens he lived and studied in Jeddah, Saudi Arabia. He arrived in London as an underage unaccompanied refugee without a word of English and went on to earn an MA in Development Studies from SOAS and a BSc in Economics from UCL. His debut novel, The Consequences of Love (Chatto & Windus, 2008), was shortlisted for the Commonwealth Writers' Prize and was translated into more than 20 languages.

His second novel, Silence is My Mother Tongue (Indigo Press, 2019 and Graywolf, 2020), is a Finalist for 2021 Lambda Literary Award for Bisexual Fiction and was longlisted for the 2019 Orwell Prize for Fiction. His essays appear in LitHub, Granta, the New York Times, De Standaard, and Passa Porta. He is a contributor in the anthology Tales of Two Planets (Penguin, 2020, edited by John Freeman) and also Addis Ababa Noir (Akashic Books, 2020, edited by Maaza Mengiste). Sulaiman Addonia currently lives in Brussels where he has launched a creative writing academy creative writing academy for refugees and asylum seekers and the Asmara-Addis Literary Festival (In Exile.) In September 2021 he was awarded the Golden Afro Artistic Awards for literature, in recognition of his literary activities in Brussels.

Canongate Books UK + Graywolf Press US will publish Sulaiman Addonia's third novel, The Seers, in Spring 2023. Set around a foster home in Kilburn, this ode to London, the city of immigrants, explores the first weeks in London of an Eritrean unaccompanied minor refugee; Hannah arrives with her mother's diary, containing a disturbing sexual story taking place in the same mountains of Keren, Eritrea, where the British defeated the Italians in WWII. As well as giving a glimpse into the UK asylum system and what it does to the mental health of young refugees, how the intergenerational history of colonisation affects the sexual and intimate relationships, the book also details the sexual conquests of queer young African immigrants in London, who are fluid, trans and androgynous. Ellah Wakatama, Editor-at-Large, said: "Sulaiman's continued exploration of the intimate and erotic lives of those on the margins of society fascinate me. He is always brave and innovative; the work always feels urgent and necessary. He is one of the most thoughtful, ambitious and bold writers I know and it's a privilege to have this chance to publish him at Canongate."

Brittle Paper, The Art of Making Love to Yourself

Literary Hub, How Do Writers Without Access to Books Develop a Craft?

Literary Hub, The Wound of Multilingualism: On Surrendering the Languages of Home

Granta, In Search of Beauty: Blackness as a Poem in Saudi Arabia

MsAfropolitan, The Sexless Life of My Mother

Brittle Paper, The Voices I Overcame to Write Silence is My Mother Tongue

Al-Jazeera, For Refugees, Hope is Ever-Present in Europe

Anderson Tepper in World Literature Today "One of the most astounding books of this past year—which may have slipped your attention due to the pandemic—was Silence Is My Mother Tongue, the second novel by Ethiopian Eritrean writer Sulaiman Addonia. Published last September by Graywolf Press, the novel is just now beginning to get the recognition it deserves: it was recently shortlisted for the Firecracker Award for Independently Published Literature and is a 2021 LAMBDA Literary Award finalist. Set in a refugee camp in Sudan, the novel defies expectations—shimmering with sensual detail, it charts the daily encounters and erotic dreams of an extraordinary cast of characters, with the inseparable siblings Saba and her mute brother, Hagos, at its center."

New York Times Book Review: "A riveting, mysterious, almost magical and delightfully chaotic depiction of the inner workings of an East African refugee camp. . .The novel leaves us with the lingering imprint of the siblings' many sacrifices, and their ever-growing love."

The Rumpus: "Silence is My Mother Tongue dissects how a refugee camp erases one's individuality, what communities demand of women, and how, in the face of great loss and scrutiny, one can find a way to redeem individuality by redefining love, sex and gender roles."

The Guardian: "The exchange of masculine and feminine roles within the context of a sexually conservative culture makes for a gripping and courageous narrative."