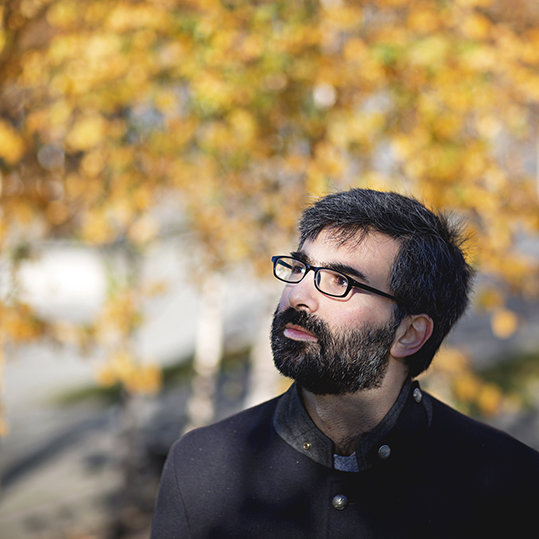 ODAI AL ZOUBI is a writer, journalist, and translator. He studied Philosophy at the Lebanese University, Beirut, and at University of East Anglia, Norwich, where he received his PhD. His philosophical research focuses on semantics and speech act theory.

He has translated works by Bertrand Russell from English into Arabic. He has published three collections of short stories in Arabic (Al Mutawassit Publications). In Spring 2019 his first stories to be translated into English appeared in The Common (Issue No. 17, Arabic Stories from Syria).  His story, The Trial of the Cold North (previously published in French and Dutch and Danish) is selected for Best Asian Short Stories 2019, appearing for the first time in English. He has had articles published in English at openDemocracy and in Danish, Dutch, French, German, and Spanish publications. He also writes (in Arabic) for the Syrian culture website Al-Jumhuriya.

He has been selected for Civitella Ranieri and Bogliasco residencies in Italy.  He currently resides in Malmo, Sweden.

Read interview, Silence in the Syrian Limbo, in The Common

Read in The Common, Silence, two short stories: A Sticky Patch and From the Depths of Sleep You Snatch Me (translations by Robin Moger)

Read his op-ed in Newsweek: Gogol's Ghost: A letter from a Syrian to the Russian public about the war on Aleppo

Read his powerful article : The Morals of Pessimism: "What are the morals of pessimism? Who advocates for them in Syria today? And what is the relation between these morals and the increasing proliferation of fascisms?... Fascisms triumph when we surrender, not when they exhibit their most violent appearances. This surrender reflects a soul already enslaved to all kinds of violence and despotism."

Read his openDemocracy articles: Syria: revolution or civil war (April 2013) and Moral principles, the 'Leftists' and the Syrian Revolution (March 2012)

Read his story A Syrian in the Cold North published in French: Courrier International published in Dutch: 360 Magazine

Read his literary essay: Elegy, about his grandmother, published in French

Read his articles, published in Danish newspaper Information, about "Danish values" which sparked debate in Denmark, It seems nice to talk about Danish values when I've spent most of my life struggling for exactly the same in Syria and To do and not to do in Denmark