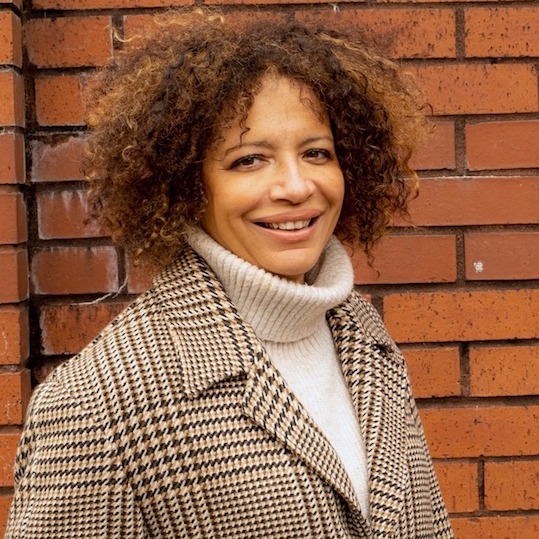 DIANA ANYAKWO was born in 1974 in Lagos, Nigeria. She is of mixed Irish and Nigerian heritage. She moved to the UK when she was a teenager and later graduated from the University of Manchester with a degree in Molecular Biology and a Masters in Bioreactor Systems. She spent three years in Athens, Greece where she taught English and worked as an editor at an educational publisher.

She currently lives and works in Manchester as a freelance writer and editor of English Language teaching materials. She completed a course in Creative Writing with the University of East Anglia.

Her debut novel will be published by Atom Books, Little Brown UK in Spring 2022.

My Life As A Chameleon is narrated by Lily - a mixed race girl growing up in Lagos, Nigeria and Manchester, England from the late 1970s through the 1980s. The novel starts when Lily is four and follows her over the next eleven years. Her mother is Irish, working as a secretary to the Irish Ambassador, and her father is a Nigerian doctor. She has three older siblings, a brother, Luke, and two sisters, Sophie and Maggie. Lily doesn't fit in with her siblings because of the large age differences between them and her. She has a difficult relationship with her father, and she clings to her mother who is always busy working or worrying. Lily begins to sense there is something going wrong with her family, but she doesn't understand what it is. The problem becomes evident when she is seven and witnesses her father physically attacking her mother, a memory she will never forget. This is when Lily learns that her father suffers from schizophrenia.

Lily is initially relieved when her mother decides to send her to live in Manchester, England with her older brother, Luke, and his girlfriend's family. Lily now finds herself in a completely different setting: Moss Side, a poor area of the city. She is bullied in her new school and also in her new home and family. The culture is completely different. She witnesses racism and violence and experiences poverty for the first time. She struggles to fit in. Despite her suffering, when her parents come to visit, she refuses to go home. She is still afraid of her father and still doesn't understand his illness.

When her father's physical health starts declining Lily's mother sends for her. Lily is ten years old when she returns to Lagos. She helps her mother care for her dying father, and she realizes she is no longer scared of him and finds a connection to him in his last months. After he dies Lily starts at a new school, an American school in Lagos. She grows into an anxious teen while life in Nigeria becomes dangerous with armed robberies and military coups. Lily's mother suffers from depression. Lily navigates adolescence and all the challenges that come with it with her characteristic sensitivity, always feeling either invisible or too visible.

Diana says: I'm sharing this story because I believe we can all relate to the intensity of our feelings as we are moving from childhood through our teenage years to being an adult and I want young people to feel that whatever they are going through, they are not alone.