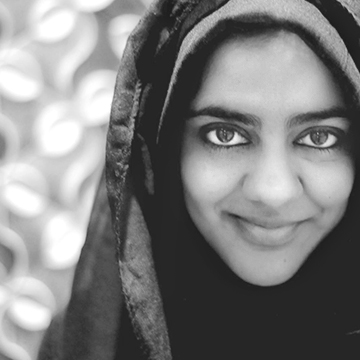 ZANIB MIAN is an accomplished children’s author whose books have featured on BBC’s Cbeebies Bedtime Stories and The Guardian for their contribution to diversity in children’s literature. Zanib studied Molecular Cell Biology at University College London and went on to teach Science in secondary schools before she made the decision to give up the career to create change within children’s publishing. She felt that diverse characters from all minorities and backgrounds weren’t being fully represented in books for young children. She launched Sweet Apple Publishers with a clear commitment to publishing inclusive books, many of which she has authored herself.  Zanib also launched Muslim Children's Books where she publishes Islamic children's books that truly speak to Muslim children of today.

In 2018, Zanib Mian was the surprise winner of the Little Rebels Award for her self-published middle grade book, The Muslims. This was then signed up by Hachette Children's Group in a world rights deal to become Planet Omar: Accidental Trouble Magnet (2019) and the launch of a new series, illustrated by Nasaya Mafaridik, and perfect for fans of Tom Gates and Wimpy Kid. Planet Omar: Accidental Trouble Magnet was longlisted for the UKLA Award and nominated for the CILIP Carnegie Medal and shortlisted for The Diverse Book Awards. In 2021 Zanib Mian was selected for World Book Day (UK) and shortlisted for The Diverse Book Awards and recommended onthe BookTrust’s list 100 Best Books of the Last 100 Years. The Planet Omar series is also published in the North America by Putnam (Penguin Random House) and translated into translated into Arabic, Danish, Dutch, German, Italian, and Turkish.

Zanib Mian commented: 'I'm incredibly excited for Lime to bring Omar to the screen. Muslim lead characters in children's TV have been so rare. When children see themselves represented they feel a beautiful message of belonging and being understood. The stories told through Omar and his family and friends will be enjoyable and relatable to every child. Everyone playing a part in making Planet Omar into a TV series should be very proud!'

Sajid Varda said: 'This is an incredible milestone for Muslim representation in children's programming. I have been a fan of Zanib's work for many years and the Planet Omar series is a firm favourite with my children. I am both excited and proud to be developing this series for TV and working alongside Lime Pictures who are leading the way in bringing richer and more diverse stories to our screens.'

Sunday Times "The illustrations are jolly, the writing is light on its feet and Mian's gentle mixing of humour and Muslim tradition is fresh and necessary."

Times Literary Supplement "Newly independent readers in the market for highly illustrated, humorous fiction in the Tom Gates vein should seek out Zanib Mian's Omar series. Omar is a dreamy, inventive boy, perpetually poised between idealistic altruism and down-to-earth mischief…His day-to-day adventures, are absorbing, comic and enjoyable, full of playfulness and imagination – and the means by which he and his family counter prejudice and bullying strike a careful balance between the hope of blooming new friendships and the pain of being poorly treated by the ignorant."

See the excitement for Zanib Mian's book The Muslims when it was the surprise winner of the Little Rebels Award 2018 – chosen over a shortlist of seven authors including Malala Yousafzai and Gill Lewis! in The Bookseller