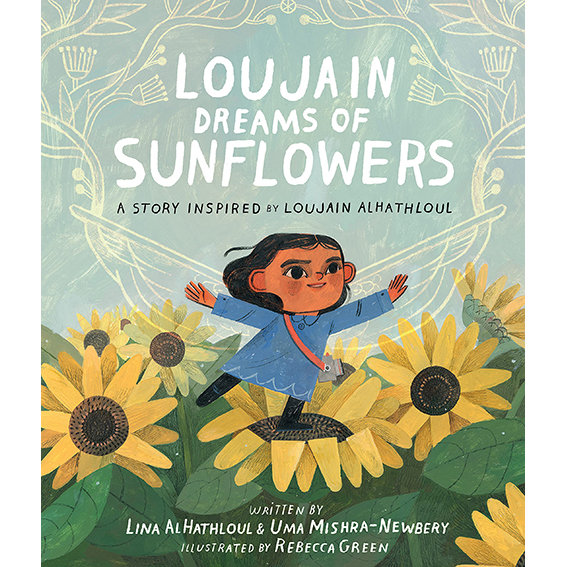 "My sister Loujain has inspired the world with her bravery and courage. Even though she has been in prison for nearly three years, she is never forgotten -- not even for one day. I am looking forward to this picture book being in the hands of children and parents globally so that they too can know that my sister Loujain has never given up on fighting for what is right,"

Loujain watches her beloved baba attach his feather wings and fly each morning, but her own dreams of flying face a big obstacle: only boys, not girls, are allowed to fly in her country. Yet despite the taunts of her classmates, she is determined that some day, she too will learn to do it--especially because Loujain loves colors, and only by flying will she be able to see the color-filled field of sunflowers her baba has told her about. Eventually, he agrees to teach her, and Loujain's impossible dream becomes reality--inspiring other girls to dare to learn to fly. Inspired by co-author Lina al-Hathloul's sister, formerly imprisoned Saudi women's rights activist and Nobel Peace Prize nominee Loujain al-Hathloul, who led the successful campaign to lift Saudi Arabia's ban on women driving. This gorgeously illustrated story is lyrical and moving.

The children's picture book by Uma Mishra-Newbery and Lina AlHathloul and illustrated by Rebecca Green is set to be published by mineditionUS in February 2022 in the United States, with France, Germany and other countries to follow.

"Our book is a story about a girl who dreams of seeing an enormous field of sunflowers, despite living in a country where only boys are allowed to fly. This story would not have been possible were it not for the courage of Loujain. She has inspired thousands of people globally, and it is our hope as authors that kids and parents too will know the story of Loujain, and be moved and inspired," said co-author Uma Mishra-Newbery.

Loujain Dreams of Sunflowers is for young readers ages 4 to 8 years old, and is inspired by the Nobel Peace Prize nominee Loujain AlHalthloul. Along with the magical story of a young girl who perseveres and achieves her dream of flying despite gender bias in her country, the book will include age-appropriate informational material to help parents and teachers present Loujain's life story, including her successful campaign to lift Saudi Arabia's ban on women driving, her subsequent imprisonment of nearly three years, and the worldwide girls' and women's human rights movement that her case has galvanized.

"It is an absolute honor for mineditionUS to publish Loujain Dreams of Sunflowers," said Maria Russo. "Our mission is to publish books that expand children's experiences of cultures other than their own, opening their hearts and minds and creating the next generation of true global citizens. We are thrilled to be working with Lina, Uma, and Rebecca to bring children around the world this beautiful story inspired by Loujain AlHathloul's courage and fight for justice, and to teach them about her life and the ongoing struggle to regain her freedom."

Uma Mishra-Newbery and Lina AlHathloul are human rights activists. Lina is the sister of Loujain AlHathloul. Loujain Dreams of Sunflowers is their debut book. Rebecca Green is the New York Times best-selling illustrator of picture books including Becoming a Good Creature, written by Sy Montgomery, and the author/illustrator of How to Make Friends with a Ghost.

To learn about Loujain AlHathloul, the #FreeLoujain campaign and how you can help visit