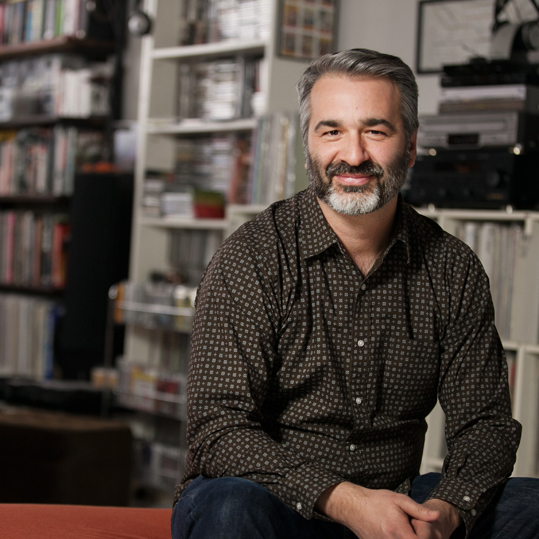 Sean Rabin's first novel, Wood Green, is at once a brilliantly sustained comic performance, an anatomy of a small community halfway up a brooding mountainside, an imagining of the processes of making fiction and their human costs…The novel's most extreme virtuoso turn is the strange, shocking, yet at the same time artfully prepared shift into a different kind of book from the one that we thought we'd been reading…among the best written about Tasmania.

SEAN RABIN was born in Hobart, Tasmania, He has worked as a dishwasher, cook, script reader, copy-editor and journalist. He has lived in Ireland, Italy, London and New York, and now resides in Sydney, Australia. When not writing, he is reading and listening to music. His short stories have been published in Australia and the United States.

Sean Rabin's second novel, The Good Captain, is set at the end of the 21st century – a time of plummeting fish stocks, rising sea levels, toxic algae blooms and jellyfish swarms – following an international group of radical environmentalists led by an unusual female captain who have committed to a mission of extreme civil disobedience against the powers threatening to destroy the last of the world's marine life. Recruits come from every corner of the world – Australia, Russia, England, the Philippines. Why are they being hunted? Because life below the waves is crashing, and the only way to save what is left is by sinking fishing trawlers. Unlike other novels that use climate change as a plot device to punctuate traditional narratives this puts climate change at the centre of the story and delivers a novel written in the tradition of cat-and-mouse seafaring classics that also reflects how the world might soon be – random, dangerous, surprising and sometimes even miraculous. The Good Captain offers a stark warning for the political classes that their negligence will not go unpunished, and pushes back with a rousing call to action in the vein of Naomi Klein, Greta Thunberg and Extinction Rebellion. A combination of social outrage and page-turning excitement, this imaginative thriller will also appeal to fans of Jules Verne, Jeff Vandermeer and Ursula Le Guin.

His debut novel, Wood Green, has had rave reviews in Australia where it was shortlisted for two major prizes:

The 2016 Readings Prize for New Australian Fiction: Why You Should Read Wood Green

The 2017 Victorian Premier's Literary Awards for Fiction, Judges' Report: "Wood Green explores the relationship between art and life, and contains some illuminating passages about what it means to create art. Evoking the insularity of a small town life, it deals with its location and characters with warmth and humour. Suspense-fully plotted and cleverly narrated…a book beyond categorisation – covering the domestic and the cosmopolitan, the pedestrian and the sublime, all with equal skill and authenticity."

"While Wood Green could be considered experimental literature, it's not a wilfully difficult book. A Chinese box of a novel, an exploration of the friction between realism and the surreal, between style and function, and the other attendant questions that a writer must ask before putting pen to paper. The ending is quite bizarre."- The Australian

"Let go of your expectations for a single narrative, this first novel by Sean Rabin is woven of many human lives…The book also provides a commentary on what it means to be a reader…It successfully interrogates the beast that is the novel, that is fiction, and it also plays most marvellously with the notion of what it means to be a writer…At its simplest level Wood Green is a ripper yarn with a magnificent twist."- The Mercury (Hobart)

"Stories about Faustian pacts are perennially fascinating…There's a special pleasure to be found in the way Rabin deals with literature and music…dark and evocative, a gorgeously rendered moody place where weird things happen…Wood Green is at once a love letter and a hate letter to literature, writing, writers and readers… in the end, its success comes down to the ultimate test of any novel: could I easily put it down? Reader, I could not." - The Saturday Paper

"Atmospheric, unsettling and claustrophobic…the unpredictable plot offered a twist that darted out from nowhere and took this story to another level…A compelling portrait of literary ambition and a tribute to the keen eye of small publishers like Giramondo." - June Book of the Month and #1 Bestseller in Better Read Than Dead bookshop, Sydney

"Wood Green deals with the complex business of forming and sustaining various kinds of relationships…with warmth, wit and intelligence…Merciless, unpredictable, and subversive…Wood Green is certainly a complex imaginative work, but it is also accessible…Wood Green's blurb prepares us for 'an unsuspected plot twist', but its denouement is more than just surprising: with it, Rabin deftly entwines the opposing literary values that his novel entertains, and conjures a climax of uncommon resonance and ambiguity." - Sydney Review of Books

"I closed the book with a feeling of great satisfaction at having been hoodwinked, and then opened it again to browse through and admire the mastery with which it was done…Rabin has exposed ambition and arrogance in a splendid denouement, leaving the reader with much to think about. Highly recommended."- ANZ LitLovers LitBlog

"Full of warmth and humour and the messes of human life, a shimmering, organic and commanding novel."- Ashley Hay, author of The Railwayman's Wife

"It is the strangeness of Wood Green, however, that really elevates the book… By the close of play, Rabin reveals himself to be a writer of the Michel Faber type, able to fashion a narrative that is compelling, funny, humane and bizarre without ever losing his grip on the reader's hand. We'd recommend this book heartily and will be looking out for whatever Rabin turns his hand to next." - Bookmunch.wordpress.com