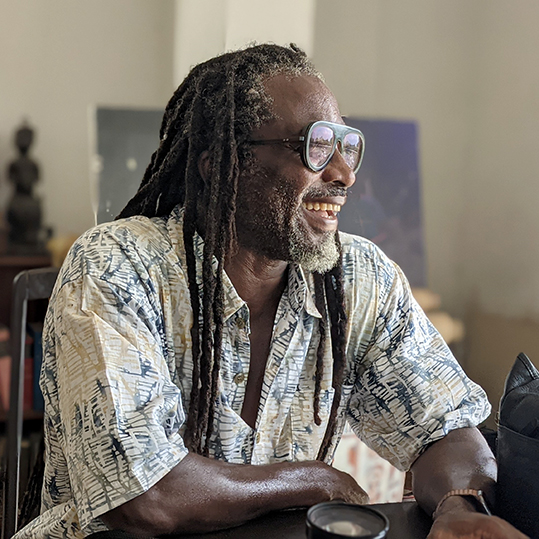 "A novel of stunning authenticity…everything is seen in the monstrous and tender close-up of love."

John Berger on The Street

BIYI BANDELE was born in 1967 to Yoruba parents in Kafanchan, northern Nigeria. He left his parents' house at age 14 to earn his living doing odd jobs, while also going to school and writing his first novel.

From 1987-1990 he studied Drama at the University of Ile-Ife, where his play Rain won him a scholarship that brought him to the UK, which he has called home ever since. His plays have been staged at the Royal Court Theatre and have been performed by the Royal Shakespeare Company. In 1997, he adapted Chinua Achebe's Things Fall Apart for the stage, to international critical acclaim, and in 1999 wrote a new adaptation of Aphra Behn's Oroonoko. He was Judith E. Wilson Fellow at Churchill College, Cambridge from 2000-2002, and Royal Literary Fund Resident Playwright at Bush Theatre from 2002-2003.

Bandele's first and second novels, The Man Who Came In From The Back of Beyond and The Sympathetic Undertaker and Other Dreams, were published in 1991 and were followed in 1999 by The Street (Picador) and, in 2007, by Burma Boy (Jonathan Cape/Vintage in UK, also published in USA by HarperCollins as The King's Rifle). Burma Boy has been translated into seven languages: Dutch (De Bezige Bij), French (Grasset), Hebrew (Kinneret), Italian (Bompiani), Polish (REBIS), Portuguese (Record, Brazil), Swedish (Leopard Forlag).

For 2019-2020 Biyi was in NYC for a Fulbright Visiting Scholarship at NYU. His feature documentary Fela Kuti: Father of Afrobeat was a phenomenal success when it went out on Arena on BBC Two. Now he is in Lagos writing and directing the film of Wole Soyinka's novel, Death and the King's Horseman, for Netflix. He is also writing his fifth novel, a historical epic about the extraordinary life of Samuel Ajayi Crowther.

Giles Foden, The Guardian "The grand list of comic military characters in literature - from Uncle Toby in Tristram Shandy to Private Chonkin and the good soldier Sveijk - will find its ranks swelled by another member. His name is Ali Banana and he is largely the creation of Nigerian-born playwright Biyi Bandele."

Ronan Bennett "As humane, ridiculous and moving as Waugh's novels of the world at war."

Kevin MacDonald "How often do you read a book that not only introduces you to a whole swathe of history you've never even heard of before, but also presents you with a whole new way of seeing the world? Original…often very funny. A magical book."

Maggie Gee "Biyi Bandele vividly recreates the violence and drama of a forgotten war, describing the camaraderie between fighting men with humour and compassion."

Biyi Bandele is also the director of feature film Half of a Yellow Sun (2013), based on the novel by Chimamanda Ngozi Adichie and starring Thandie Newton, Chiwetel Ejiofor, and John Boyega for which he also wrote the screenplay. His television work includes Not Even God is Wise Enough, a BBC2 drama directed by Danny Boyle in 1994, and Bad Boys (BBC 2, 1996) starring Clive Owen. He wrote and directed two seasons of the MTV series Shuga. His second feature Fifty, had its world premiere at the BFI London Film Festival in 2015. He was an artist-in-residence at the Tisch School of the Arts, New York University, in 2017 and in 2019.